Some Tips while Touring China

China features exotic landscapes and the opportunity to try food and drink you would be hard-pressed to find anywhere else in the world (that’s right; “Chinese food” found in the US is not exactly the same as what the average Chinese person consumes at home).

However, thanks in part to rumors about the cleanliness of the food or water in China or other spurious claims, many potential tourists are asking questions like “Will I be safe in China?”

First of all, it should be pointed out that China receives over 100 million visitors each year and is consistently one of the top tour destinations in all the world, due in large part to the increased interest in coming to China resulting from hosting the 2008 Beijing Olympics.  China has a vested interest in making visitors feel safe in order to keep bringing more tourists to the country every year, so they make a conscious effort to make these visitors feel safe and protected.

While (especially Western) tourists often find that Chinese culture can be quite different from their own, below we will show that by exercising normal caution, China is every bit as safe as any other country.

For instance, just take a look at this map of the safest countries to visit based on a 2017 UK study: 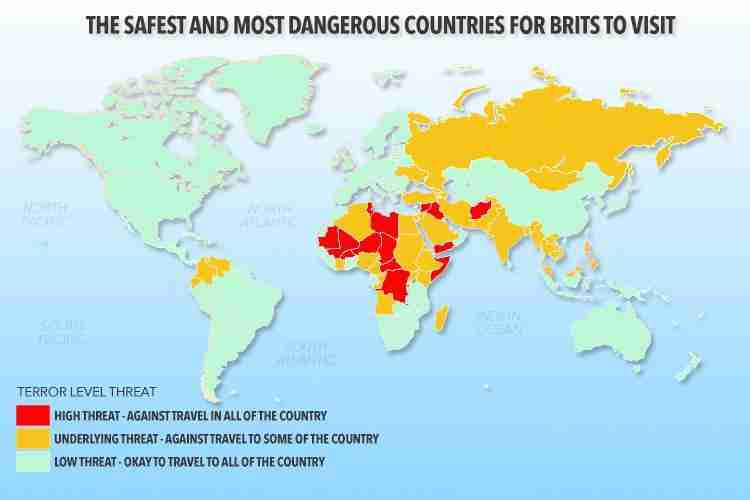 Exercise Common Sense When You Travel

Even before you head overseas, contacting your local embassy in China can help ensure you will know exactly how to obtain a travel visa and will give you a good point of contact with your home country in the event you do have any issues while in China.

Thanks in large part to China’s booming economy and expanding middle class, joblessness is on the decline, which means the likelihood of being the victim of pick-pocketing, let alone cases of violent theft, is lower than in many other countries.

Keep your personal possessions close to your person at all times when out in public.  As is the case when travelling in other parts of the world such as Europe or Latin America, someone may try to make off with an unguarded purse, wallet, jewelry, or other items.  Don’t leave your hotel or apartment with lots of money, and make sure you inspect any cash you receive from a vendor.  Legitimate Yuan (RMB) will have a certain texture to it, and all but the one Yuan note will bear a metal band from top to bottom.

Traveling within China is much like it is everywhere else in the world: in tight urban centers, traffic can be considerable, but safety is not really a concern.  Taxis in Beijing, for example, drive about as well (and aggressively) as those motoring though New York City.

If you’re ever in a jam, asking for help from a nearby high school student could be your best bet.  Even if you speak some Mandarin, it’s always possible the locals only speak their native dialect of the language and won’t be able to understand you.  Thankfully, just about any high school student in China (or just about anyone under 25 years old) will likely know both Mandarin and English.

Most big cities in China (and there are a lot of them) are full of police officers and security cameras so you will always have recourse to legitimate protection anytime you are out and about.

Be on the lookout when crossing the street.  The American ideal of imbuing pedestrians with the right-of-way is not universally recognized: not in Europe, not in the Middle East, and not in China.  Pedestrians, bicyclists, and motorists frequently operate with little to no concern for whether a light is red or not.

Many travelers are concerned with how clean the food in China is.  As usual, simply try to avoid buying food from someone you would consider untrustworthy.  Bringing along some Pepto Bismol will ensure food isn’t keeping you from enjoying the sights of China.

Here are a few behaviors to avoid while in China unless you want to ruin your trip:

By simply exercising normal caution as you would in any foreign country, you should have no issues with safety during your stay in China.

You can read about specifics and keep up to date on any US-based safety concerns for China travel on the Department of State website.

If you’re considering planning a trip to visit China, the experts at Chinatour.com offer numerous affordable packages for guided tours, or you can build your own tour based on exactly what you want to see!