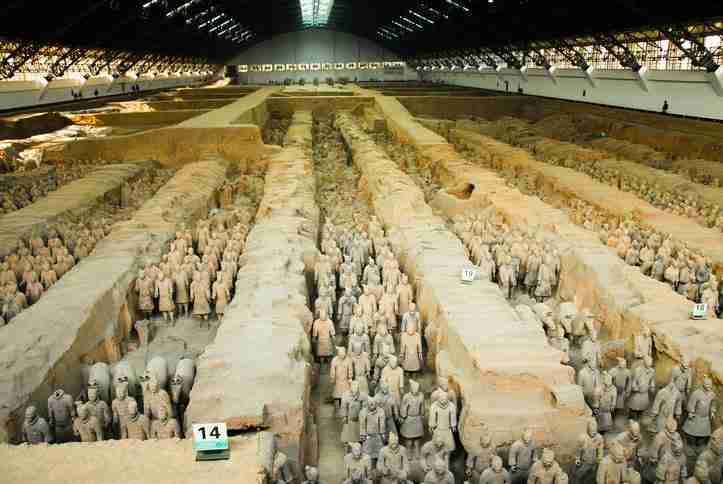 The Pride of Xian

Until 1974, one of China’s most significant archaeological discoveries lay hidden for two millennia. As archaeologists worked to unearth these historical relics, they found not one warrior, but an entire army consisting of thousands of clay soldiers. Even more miraculous is that each soldier is unique, having his own facial expressions while positioned according to their ranks.

Today, the warriors are mostly gray, but bright patches on their clothes hint that they were originally painted. Archaeologists have also unearthed weapons, including swords and arrow tips. Lining underground corridors, some soldiers reside alongside clay horses and wooden chariots.

The first emperor of China commissioned the world-renowned terracotta army, which is part of an elaborate mausoleum to guide him into the afterlife.

Ying Zheng was 13 years old when he took the throne in 246 BCE. By 221 he was credited with unifying several kingdoms at war, thus earning the name Qin Shi Huang Di, the First Emperor of Qin.

History shows that the young emperor ordered the mausoleum’s construction after taking the throne. To accomplish this incredible task, more than 700,000 laborers worked on the detailed project, which stopped a year after his death.

Only four pits of soldiers are partially excavated. Three pits feature terracotta soldiers, weapons and horse-drawn chariots. The fourth pit remains empty, which shows that the project was never completed.

The total number of figures may never be known, but experts estimate that it contains as many as 8,000.

The emperor’s tomb itself has not been excavated, but writings allude to treasures that are even more significant. One version of translated text reads, “The tomb was filled with models of palaces, pavilions and offices as well as fine vessels, precious stones and rarities.”

Experts believe that the tomb contains replicas of China’s rivers and streams that were carved with mercury that flows to the sea through mountains and hills of bronze. The precious stones likely include pearls, which represent the moon, sun and stars.

Around the tomb, excavation reveals musicians, dancers and acrobats caught in mid-performance, but currently, further excavations on the tomb are temporarily on hold.

If you’re interested in seeing the Terracotta Warriors first hand, book your trip with Chinatour.com. Whether you’re an avid historian, relic hunter or adventure-seeker, we promise you won’t be disappointed by the wealth of exploration China has to offer.

If you want to experience the Terracotta Warrior Army first hand, check out our 15 Day Yangtze Cruise Tour with Bullet Train here.

Book now and experience the trip of a lifetime!