Travel to China with the Pros

Since the Chinese Revolution of 1949, the city of Guilin (桂林, “Forest of sweet osmanthus”) has been the poster child for Chinese tourism–in fact, it was the first city to actually invest in attracting tourists.  The money invested into the city to this end can be felt today, from its modern amenities to its urban layout.

The karst peaks that make up so much of Guangxi province form the backdrop of this beautiful city, while its position astride the Li River provides for tranquil aquatic views and a very pleasant means of transportation to Yongshuo County.

Things to do in Guilin:

Seven Star Park: this picturesque clearing has plenty to see, especially for children, with its play area and pond where you can feed the fish, but anyone can enjoy a slow stroll through it.

Elephant Trunk Hill: the Li and Taohua Rivers meet near the southern end of Guilin where you will find one of the city’s more famous natural attractions.  Elephant Trunk Hill has wowed visitors for years, almost all of whom can clearly see the resemblance to the familiar pachyderm.  Take advantage of the incredible view offered by Puxian Pagoda where you can look down on the park and the mighty Li River.

Sun & Moon Pagodas: sited right on the bank of Shan Lake are impressive twin pagodas whose lights dazzle at night and bounce off the surface of the lake.

Shan (“Fir”) & Rong (“Banyan”) Lakes: both were once part of the city’s moat and are a peaceful respite in the heart of bustling Guilin.

Solitary Beauty Peak: take in more scenic views of the city from this lush park where for a fee you can visit a small mansion dating from the 14th century.

Reed Flute Cave: this cave is named after the reeds growing outside the entrance which for years have been used to make flutes.  All manner of rock formations form the interior of the cave including stalagmites and stalactites formed over many years by carbon deposits.  Colored lighting inside brilliantly illuminates the entire cave creating an entirely unique and beautiful scene.

Less than 45 miles (70 km) downstream of Guilin lies scenic Yangshuo.  Cruising down the Li River offers many photo opportunities as you pass the towering karst limestone peaks, groves of bamboo, and roaming bands of water buffalo.  Those who love the outdoors will greatly appreciate this countryside alternative to a big city like Guilin.

Ok, I’m sold.  When is the best time to visit Guilin and Yangshuo?

As with most parts of China, the weather can vary significantly season to season, giving you a different view every few months.  The weather in spring is misty and cool, warm and sunny in summer, cool and colorful in the fall, and chilly and quiet in the winter.

You should keep in mind that certain holidays will drastically affect how much you are able to see and do based on the crowds.  The Chinese Summer Holiday is July and August, when students and others have the time to travel.  Many parts of China are too hot during this time of the year anyway, so you may choose to stay home altogether.  The Mid-Autumn Festival takes place over several days in late September or early October depending on the year, and the Chinese National Holiday is from the 1st to the 7th of October.

Click here to learn even more about Guilin including the many affordable tours of the city we offer! 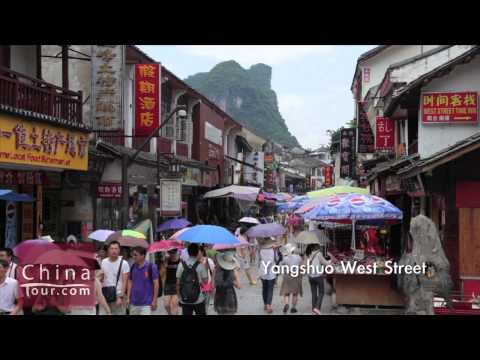