Founded in 1987, Chengdu Research Base of Giant Panda Breeding is a non-profit breeding facility for giant pandas and other precious and endangered animals. It is located at Futou Hill, about 10 kilometers away from downtown of Chengdu.

The base began with 6 wild pandas rescued from the wild. Today the number of giant pandas is up to 70.

At more than 9 acres in size, the base was built for the purpose of creating and imitating the wild environment. It is home not only of giant pandas but other breeds of pandas, black-necked cranes, white cranes, and other rare and endangered animals. The necessary facilities for giant panda have been build, which contains a fodder room, veterinary station, and comprehensive service center. The natural environment was built for protecting species of giant pandas with the intention of one day releasing them into the wild.

In 1993, the one-acre Giant Panda Museum was established. It is the only museum in the world which focuses on rare and endangered animals. At present, the museum consists of three exhibition halls including giant panda, butterfly, and vertebrate halls. The museum contains scores of pictures and more than 2,140 samples collected in Sichuan Province. In addition, the museum collected over 10,000 specimens and thousands of volumes of documents related to giant pandas and other animals.

The best time to see the giant pandas is during their meal time, typically before 9 am. 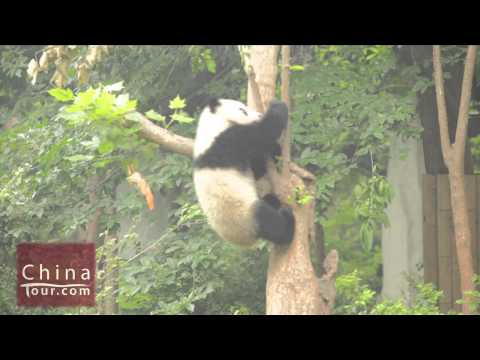