Make the Most of Your Tour of China

The capital of Shanxi province, Xi’an, (pronounced “Shee-ahn,”) is one of the oldest and most prestigious cities in China. With over 3,000 years of history the city is full of character, personality and many astonishing things to see and do. This list is merely a small portion of some of the amazing things that can experience while visiting Xi’an.

1. Stroll down Powder Lane and the Muslim Quarter 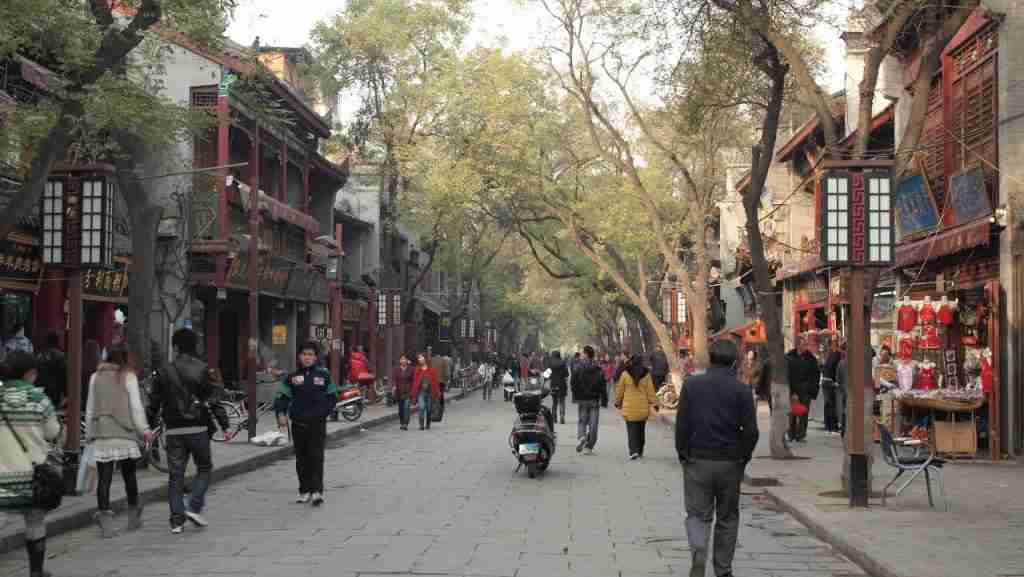 Some of the most fascinating and popular attractions in Xi’an are on Powder Lane and in the Muslim Quarter. If you want to try delicious snacks and foods that date back hundreds of years, then this is the place to go. From beef to lamb, breads to soups, or even drinks and desserts, the Muslim Quarter is a great place to taste the history and culture of Xi’an.

Many Westerners are surprised that there is a considerable Muslim presence in Xi’an, such that they have their own quarter in the city just to the northwest of the heart of the city.  In fact, more than 20,000 Muslims call Xi’an their home. There are 10 mosques in the quarter, and the Great Mosque on Huajue Lane is the most popular.

Visitors can find souvenirs and try the local cuisine, which keeps to strict Islamic guidelines, at the Beiyuanmen Muslim Market.  It is said that the quarter long ago served as the residence of foreign envoys and merchants who eventually settled down to populate the area since the days of the Western Han Dynasty (206 BCE – 9 CE).  All the stores are operated by Muslims which gives travelers a unique opportunity to interact with this tight knit community.

When it comes to what to eat, you should definitely check out Huimin Street.  While vegetarians will have few options, savory dishes are not in short supply here.  There are countless stalls lining the street selling cakes, dried fruits, pastries, and barbecued meats, to name only a few options.  One local favorite is called roujiamo, which is fresh bread stuffed with marinated beef or lamb.

You can also find a dish native among the Uighur people called yangrou paomo, the famous pita bread in soup.

The streets in the Muslim Quarter are paved in blue-green stones and trees abound, while the architecture of the area is distinctly of the Ming and Qing periods.

The history behind the Terracotta Army is enough to go visit the museum on its own. There are hundreds of thousands of funerary art sculptures that were buried in 210 BCE with the emperor. It was only recently discovered in 1974 by some farmers that were digging a well and came upon this amazing historic army.

These thousands of terracotta warriors are actually part of a mausoleum dedicated to Emperor Qin Shi Huangdi–the warriors were likely meant to escort the emperor into the afterlife.  The emperor was the first to conquer and unify all of China, but he was also a prolific builder, constructing roads, canals, and the beginnings of what would later become the Great Wall.

Probably more than 700,000 workers were involved in building the warriors, dwarfing the number of those who constructed the pyramids of Khufu in Egypt.  Sadly, after the death of the emperor, it is reported that the artisans were forced to be buried alive in the mausoleum to keep its location unknown, which it was for centuries.

You can read more on the terracotta warriors in this fascinating recent article from National Geographic.

When visiting the tomb and museum, you can expect to spend between 3 and 4 hours.  Thankfully, because it is all indoors, weather will be no obstacle to appreciating the site to the full.  You may want to begin your tour before 10 am though which is when the bulk of the tour buses arrive.  The terracotta warriors are a big tourist attraction.

From dancing, acrobatics, music, singing, and acting, you are sure to find the entertainment and culture you are looking for the Tea House. The Shanxi Opera is full of rich history and tradition.

Originally, the Chinese would watch opera from tea houses rather than a theater until just after World War II when tea houses ceased showing opera productions.  Today, however, you can experience Chinese opera as it was meant to be!

The ancient city wall in Xi’an is an awesome sight to behold, and is the only ancient city wall in China that is complete. One of the best ways to view one of the largest military defense systems in the world is by bicycle, especially at night. With all that ground to cover you can see a lot but still keep a slower pace while having fun.

The city wall is massive and determines the shape of the city itself.  The wall dates to the to the Tang dynasty but was much improved during the 14th century, during the Ming dynasty.  According to one legend, the future Ming Emperor Zhu Yuanzhang was once strongly urged by a hermit to “build high walls, store abundant provisions, and take your time in proclaiming yourself emperor.”  Zhu Yuanzhang apparently heeded those words.

Today, the wall stands 40 feet (12 meters) high and runs 8.5 miles (13.7 kilometers) around the city with towers almost every 400 feet (120 meters), 98 towers in all.  The 4 gates allowing entry to the city are equally impressive, complete with a drawbridge to extend over the moat.  The four gates are named “Changle” (eternal joy), “Anding” (harmony), “Yongning” (eternal peace), “Anyuan” (eternal harmony) in the east, west, south, and north respectively.

The Yongning/south gate is by far the most attractive and there are a pair of free museums inside the barbican and tower here.

Learn the importance of the Huaqing Pool and the significance of the story of Emperor Xuanzong of Tang and Concubine Yang. Their story is very familiar in Xi’an and has had a significant impact their history.

6. Meditate at the Famen Temple 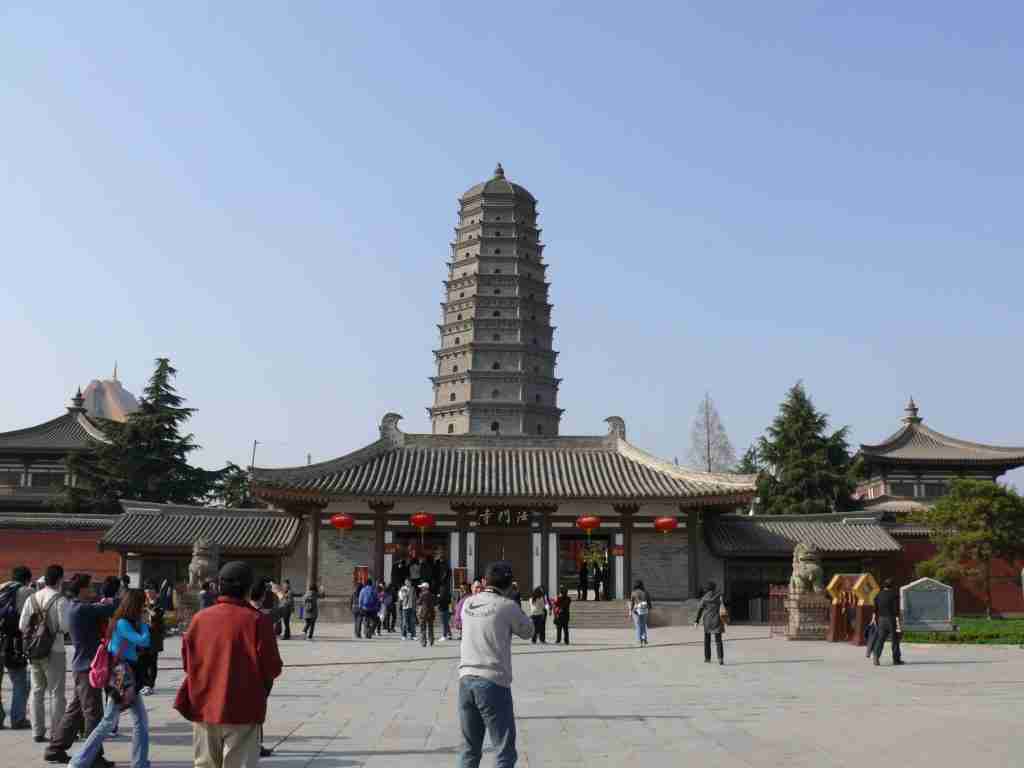 Famen Temple was built near the end of the Eastern Han Dynasty in about 220 CE. Over time it grew in popularity and is hailed by many as the “Royal Temple.” It is known as a sacred place for Buddhists because the Buddha (Phalanx Sarira of Sakyamuni, that is, a relic of a finger bone of the Buddha) was enshrined and worshiped here. A great deal of money has been spent over the years expanding and repairing the temple and is now comprised of 24 courtyards and is home to several hundred monks.

Heshi Dagoba, or Holding Palms Dagoba, was finally completed in 2009, and is a Tibetan-style pagoda shaded by a pair of folding palms, whence the name.  Inside the pagoda are reported to be a part of the skull of the Buddha along with his finger-bone, shoulder blades, four teeth, and other assorted sarira, or bodily artifacts.

The Pavilion of Buddhist Anticorona is a 200-room hotel with 5-star facilities, complete with a meditation room and other areas where visitors can learn more about Buddhist philosophy.

7. Fireworks and Water shows in the Datang Furong Garden.

The park is divided into 12 cultural themes: emperors, food, female, poetry, civil life, tea culture, service, science and technology, religion, diplomatic, songs and dances, and the gate, all to highlight the impressive civilization of Datang. Each attraction in the garden is staged with many exciting programs every day. One of the main attractions if of course the world’s largest water screen on which a film is shown every night.

Shaanxi history museum was built in 1983 but did not open to the public until 1991. The museum is situated on an expansive area of about 65,000 square meters. There are cultural relics, exhibition halls, and a collection of about 370,000 objects. It is a very elegant building and designed in the Tang style with a hall in the center and storied building on the corners.

The fountains cover an area of over 20,000 square meters with numerous fountains, gardens, walking paths, and a cultural square. Visitors are able to experience real Chinese culture and traditions while enjoying the magnificent views. There are 22 styles of musical fountains, 8 groups of sculpted figures, and 40 relievos, or relief sculptures.

So, if you’re planning a trip to China, be sure to put the historic and culturally-rich city of Xi’an high on your list of places to visit. Xi’an offers sights and attractions for tourist of all types and never disappoints. You’ll enjoy these 9 great attractions and probably find a few more along the way.

Want to learn more about this majestic city?  Check out our page on what Xi’an has to offer, and call Chinatour.com at (888) 878-1777 for answers on how you can book an amazing and affordable tour to China!