With a robust history, China is responsible for some very important inventions, but the most world-famous ones are arguably gunpowder, paper making, printing, and the compass.

China was the first country in the world to make use of paper as we think of it today. Ancient paper has been found in Gansu Province, Xian and other places in Shaanxi Province as well as Xinjiang. According to historians, this paper was made during the Western Han Dynasty (202 BCE – 16 CE).

During the East Han Dynasty (25 – 220 CE), Cai Lun used plant fibers such as tree bark, rags, bits of rope and worn-out fishing nets to make paper. In 105, Cai presented his first batch of paper made under his supervision to the then-emperor. The paper of the East Han Dynasty has been found in Wuwei, Gansu and the characters on them were still clearly decipherable. 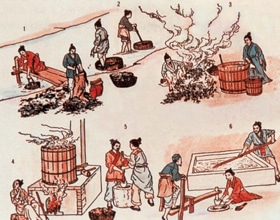 Were characters written down before invention of paper? The ancient Chinese carved characters on pottery, stone, animal bones, or wrote them on bamboo or wood slips and silk. However, these materials are too heavy or expensive to transport or use on a large scale.

Printing was invented by the ancient Chinese after extensive practice and study. On the basis of printing using carved blocks during the Tang Dynasty (618 – 907 CE), Bi Sheng of the Song Dynasty invented movable-type printing in the 1040s which was a major revolution in the history of printing. 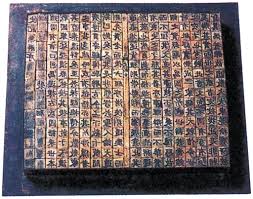 Bi Sheng’s procedure of printing included making the type, composing the text, printing, and retrieving the movable types. As for making the type, Bi Shen carved every single character on square or sticky clay and then bake them.

When composing a text, molds of characters were put within a large iron frame on the large iron board whose surface was applied with turpentine, wax, and paper ash. While one plate was being printed, another plate could be composed. After one plate was being printed, another could be composed. After printing, the movable type was taken away for later use.

The creation of gunpowder was one of the most significant achievements in ancient China. Ge Hong in the third century recorded in his book the procedure for making a certain mixture which can be ignited. After the Tang Dynasty, gunpowder had already been used as simple hand-grenades which were thrown by catapults.

During the Song Dynasty (960 – 1279), gunpowder was used extensively in a military capacity. A type of early flame-thrower which involved packing gunpowder into bamboo tubes was created. 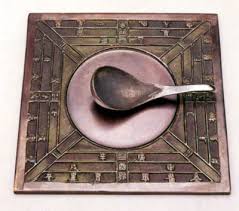 According to ancient records, magnets were used in ancient China which paved the way for the invention of the compass. The first compass was used during the Warring States Period (475 – 221 BCE). During the Han Dynasty, a type of compass was created and the main material was bronze on which 24 directions were carved. The invention of the compass promoted maritime undertakings and the compass soon spread to the Muslim world and then to Europe.