When it comes to Anhui tour, what will occur to you in the first place? As one of China’s famous historic and cultural province, Anhui owns rich tourist resources. Mount Huangshan, known as ‘the loveliest mountain of China’, is acclaimed through art and literature during a good part of Chinese history and put into the UNESCO World Heritage List in 1990. Mount Jiuhua is regarded as one of the best Buddhist destinations. In addition to majestic mountains, exquisite Xidi and Hongcun, two well preserved and maintained traditional villages of ancient dwellings, make you feel in the painting. 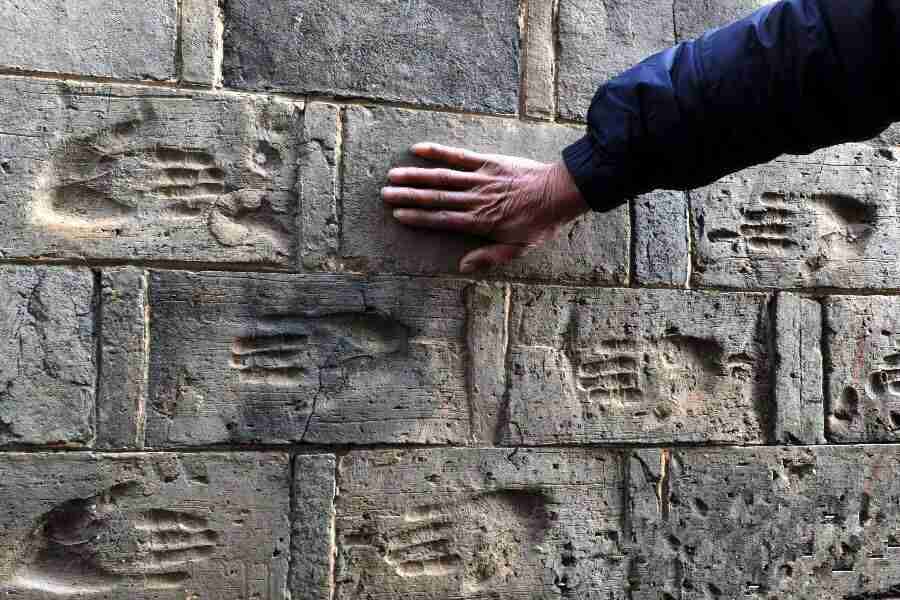 You might not have heard of Tongling city of Anhui province if you are not local, but you can not ignore its charm. Tongli, located in southern Anhui on the southern bank of the lower reaches of the Yangtze River, is the birthplace of Chinese bronze culture praised as the “City of Ancient Bronze”. It features spectacular nature near the mountain and by the river. Peony of Tongling enjoying equal popularity with Peony of Luoyang, Henan province is worth visiting. “Tongling Bronze Culture Festival”, one of the six famous tourism festival activities, is so interesting and meaningful for visitors. One place of Tongling city attracts more public attention in recent days and add more fun during Anhui travel.

On 8th February, 2015, visitors made a comparison between their own hands with fingerprints on the wall of the old building situated in the Datong town, Tongling suburb of Anhui Province. The fingerprints wall is only owned by one old building of Lang village of Datong town. It has made a distinctively beautiful scene among this village after local news reports and attracted one batch after another of tourists. According to archeologists of Tongling, Lang village is an ancient village with time-honored history of 600 years. Besides, all black bricks with fingerprints are produced in the local, but the date of production is obscure. The fingerprints are made on the processing black bricks with the purpose of checking the quality of those bricks. However it is rare to see that so many fingerprints gathered in one building.