Jade Buddha Temple is a prolific Buddhist temple in Shanghai. It was founded in 1882 by Hui Gen, from an abbot from Mount Putuo. Hui Gen made a pilgrimage to Tibet via Mount Emei and Mount Wutai, two famous Buddhist mountains. Then, he arrived at Burma where he obtained five jade statues of Buddha donated by an oversea Chinese resident. 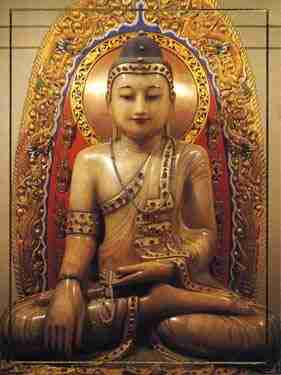 In the center is the statue of Sakyamuni, to the right, Bhaisajyaguru, and on the left, Amitabha. At the north entrance to the Grand Hall stands the statue of Avalokitesvara (the Bodhisattva representing the compassion of all Buddhas) with her two disciples on both sides. Jade Buddha Chamber enshrines the sitting jade Buddha left by Hui Gen on the second floor. This jade Buddha is just over 6 feet (1.92 meters) high and weighs 1 ton.

On both sides of the jade Buddha are cabinets which hold over 7,000 volumes of precious Buddhist scriptures. On the first floor is abbot room where a Sakyamuni portrait hangs on the wall.